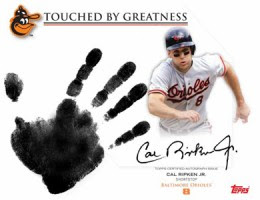 It occurred to me after returning home from dinner that I had promised a new blog post today, for the first time in nearly a year. This wouldn't be much of an issue, if I hadn't just downed 2 teaspoons of codeine cough syrup(yes for a cold). Let the race against the clock begin! If I begin to ramble incoherently at great lengths, well never mind you're probably used to it. What inspired me to end my long yet unintentional hiatus? An announcement from Topps about some HUGE news regarding 2012 Archives.

We've heard this song and dance before:

Only to find out, the game hasn't changed and it's just a slightly different dressed up version of what we've already seen. So when Topps started tweeting from the rooftops today, people immediately scoffed and the jokes started flowing. It was an almost embarrassing display as Topps seemed to be begging for RT's just to stir up interest on 2012 Archives. Some members of the blogosphere(including myself) have been pretty interested in this set to see if it can become what Lineage wasn't, and I settled in to grab a peek.

Things started harmlessly enough, with a multi auto booklet card we have come to expect in most high end Topps products. Very cool addition for sure, but hardly groundbreaking. Then, an 86 themed Darvish auto RC. Now people are beginning to buzz and interest is gaining. Still nothing mind blowing, but that all changed with the introduction of this boxtopper: 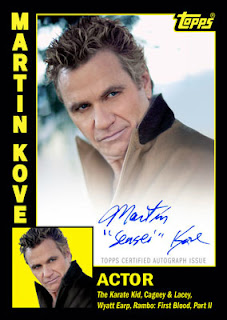 Nothing says 1984 like....The Karate Kid! The safe choice here would have been Ralph Macchio and people already began moaning as soon as word got out it was a Karate Kid based insert. I love the choice to go with Martin Kove, the dishonorable sensei we all loved to hate, who commanded that legendary phrase, "sweep the leg". Not only that, but there are also autos from Billy Zabak, who of course played Johnny, the sweeper of legs.

It was at this moment that I got the feeling we were witnessing something special developing. What followed was a blitzkrieg of announcements the likes of which I have never seen for a single product. From the multitude of "Fan Favorite" autographs(too many to list) to uncut card sheets, to Cal Ripken hand print oversized cards, it seems this product will blow away our expectations we had for Lineage, and go way beyond that. There will also be 100 signed player card contracts inserted as case toppers, Frank Robinson signed buy-backs, and numerous framed 1983 themed minis.

What makes some of these extras so great isn't so much the star power(though that helps) but the incredible thoughtfulness that went into each detail. 9 Jose Oquendo autos might seem excessive until you realize it's to commemorate his infamous game where he played all 9 positions! Darvish's 86 design was also no coincidence, as that was the year he was born. You can tell the folks at Topps have been listening to fans, and it's about time for us complainers to put our collective money where our mouths are. Changing the game requires emptying some from our pockets.
Posted by Waxtopia at 10:24 PM