My first trip to the NSCC: Everything I expected and more

Cardboard overload. That was the best way I could describe my thought process 2 hours into my first time at the NSCC. Never before had I seen so much vintage product in one place. Cards so rare and expensive I had only read about them in magazines were suddenly laying before me in glass cases like a cardboard museum. The market may be down compared to the glory days of old but it was still a breathtaking sight to behold. The charm of remake sets like Allen & Ginter suddenly take on a whole new meaning when you see an original set from 1888 for sale(unfortunately with glue stains on all the backs). There is still big money in sports memorabilia and with that allure comes scam artists looking to take advantage, as evidenced by the dealer bust on Thursday morning!

I had hoped to make it into town in time for the sneak peek Wednesday night, but that plan derailed when Megabus arrived 90 minutes late to shuttle me in from Iowa. I don't want to say it was the worst trip I've ever taken, but listening to a girl belt out UB40 songs over her headphones in a semi-conscious incoherent slur was not my idea of a good time. Thankfully once I got to Chicago everything started to fall into place.

I arrive around noon and am in awe of the vastness of the room. I start with the first aisle I see and notice alot of booths with nothing priced, only high dollar items being showcased to bring in auction interest. A number of dealers are specializing in my biggest weakness, vintage wax. A staple from my childhood collecting days, shelves full of early 80's wax boxes in chronological order feel like I've stepped into a time warp. I couldn't resist and bought a rack pack of 1983 Donruss and 2 regular packs of 84 Donruss(San Diego Chicken!). Part of me longs for the simpler times of collecting before insertmania took hold but the hobby evolves, and I can enjoy aspects of both eras.

I wanted to make sure I touched base with some of the fellow twitterverse/blog people on the first day, since the FCB meetup was Thursday night. I could see at the rate I was moving I would be lucky to get halfway through the room so I skipped ahead to the Cardboard Connection radio booth, and met Rob, Doug and Russ. Their contribution to the hobby is grossly underrated and still unknown to many collectors. After chatting for a bit, it was closing time and we headed over to the FCB meet-up. It was nice to match names with faces, although it's a bit awkward at first making introductions such as, "hi, I'm waxtopia, are you stalegum?" Chris with FCB loosened things up by giving away some great prizes, and I walked away with a Leaf football printing plate and a box of 2011 Donruss Elite. Nearly everyone won something and I think we all had a pretty good time. Bummed a ride back to my hotel and eagerly anticipated my 2nd and final day at the show. It would not disappoint.

I was more prepared for what I wanted to accomplish on day 2. I had a collection of around 50 cards I wanted to try listing on COMC and headed there first. It was my first time listing with them, and they are definitely customer service oriented. They do things the right way and the stats on their rapidly growing site traffic was impressive. 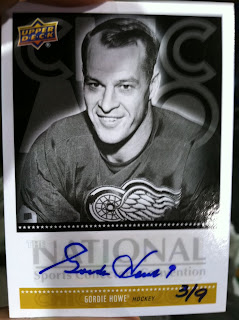 I was literally shaking as I flashed it around to everyone nearby. As almost an afterthought, I started opening my packs of SP Auth and nearly soiled myself after finding this in pack #4: 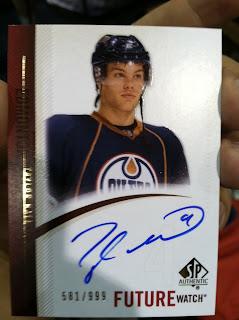 At this point I was looking for a lotto machine. This is the sort of crazy mayhem I expected at the National, and it delivered. I also bought some cheap hockey blasters and found a great Iowa Hawkeye pennant from 1957. Overall the trip was a blast and I can't wait til it's back in Chicago.

If you have never been to the NSCC, I have to say it's something every collector should experience. I know I'll be back.